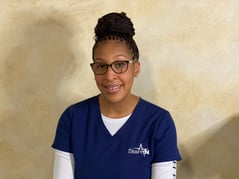 On a recent return flight to Fort Lauderdale, Letisha Wilson, RN was called into action mid-flight. During the flight, flight attendants asked if any medical personnel were onboard. Letisha, who looked around curious about what was occurring, realized a woman near her was in need of attention and quickly moved over to assist. As the woman became faint and started to lose consciousness, Letisha began to elevate her feet and lay her back on the plane.

While Letisha was monitoring the patient's airways, she called over a colleague, Dale Robinson, MSN, RN, CNE. After speaking with Dale and learning that two paramedics and a nurse practitioner were onboard, she was able to gather a blood pressure cup, first aid kit and a stethoscope to monitor the patient. Letisha assessed the patient and requested to the staff on board the plane that oxygen be provided. As Letisha provided oxygen to the patient, she also noticed that every time the patient started to gain consciousness and sit up, she would begin to regress. Letisha started an IV on the patient, while on the airplane, to provide the necessary fluids to improve the patient's health. Afterward, Letisha spoke with air dispatch and requested that a medic be prepared at the tarmac when the plane landed. To protect the airways of the patient during landing, Letisha and Dale both laid on top of the patient to help reduce the movement the patient would encounter.

Letisha is thankful to have been able to assist the patient throughout the flight while using muscle memory to understand exactly what to do. The experience helped Letisha feel as if she is exactly where she needs to be in life. Letisha, thank you for your dedication to increased patient care!